My friend and I looked at each other and groaned. We had already had fire drills earlier that week. “Shelter-in-place” meant we were supposed to stay in the building until we got the “all clear” to leave, but we figured it was just another drill. On our way out, my gym teacher turned the corner and saw us alone in the hall. Her face was red and she looked like a bull about to charge. She grabbed us both by the straps of our bags, pushed us into the nearest classroom and rushed off after a curt “Stay here.”

“We are now in a lockdown. Ignore the end bell, no one is to leave school or their classrooms until the lockdown is lifted,” the lady on the loudspeaker said. Everyone groaned. Why would they hold a drill after school ended on Halloween?

A Loud Bang: A Gunshot?

My phone beeped with an Instagram DM from an old classmate who had moved away: “Are you OK?” I was confused. I hadn’t spoken to this guy in years. Why was he asking me this out of the blue?

Then I heard a loud bang that resonated through the air. I’d only heard gunshots before in “Call of Duty,” but this wasn’t a video game. My fingers trembled as I picked up my phone and texted my friend I’d made plans with: “I don’t think I’ll make it to trick-or-treating.”

There were already articles up on news websites about an attack happening near us. I texted my parents that I was OK. The information online was vague; we just knew people were injured outside our school. (Afterward, I found out some kids in other classrooms saw injured people and police cars and ambulances through the windows.)

I felt safe in the classroom so we did trig homework, chatted, and used our phones. Other than the constant sirens and the grumbling of everyone’s stomachs, it almost felt like a prolonged free period.

Three hours later, police officers came into the room and told us we had been cleared to leave. It was dark, but all the police car lights and news cameras flashing made it look as bright as day.

When I got on the train to go home, a friend from another school called me. After hearing that I wasn’t crying or panicking, she said, “Dude, they’re saying eight people are dead. How are you OK right now?”

Her words shocked me; the school hadn’t told us what was going on. Maybe they’d been afraid that the information would cause chaos. Someone announced over the speakers every few minutes that the shelter-in-place was still in effect and it was for our safety. I looked down at the ripped shirt I was wearing for my zombie police officer outfit. It had fake blood splattered all over it. I felt like throwing up.

On the news later, I learned that a 29-year-old alleged terrorist named Sayfullo Saipov had driven a truck through the bike path next to Stuyvesant and under the bridge that led to my school, killing eight people and injuring 11 along the way. He crashed into a school bus and ran out, waving a pellet gun and a paintball gun. A cop shot him; that was the gunfire I’d heard. It felt hard to believe.

The next day, students offered weak smiles and slight pats on the shoulders to each other as we passed each other in the hallways. But my friends and I didn’t talk directly about what had happened. I thought, maybe if we don’t talk about it, it won’t be real. Still, guidance counselors came in to each classroom to let us know they were there for us. They encouraged us to come talk to them. It made us feel supported.

A few months later, on Valentine’s Day, my friends and I were eating heart-shaped donuts when my phone buzzed with a notification from Google News. I started reading about the shooting that left 17 people dead at Marjory Stoneman Douglas High School in Parkland, Florida. In the past, I would have shared the article on Facebook with a few crying emojis and tweeted about how much of a psychopath I thought the killer was. Then I would have gone back to watching Netflix.

I remember making paper snowflakes in elementary school to send to Sandy Hook after the shooting there. All I knew was that somewhere far away, 20 little kids like me and six teachers had been killed. I thought it was horrible and I felt sorry for them, but it didn’t feel real. It seemed more like a scene in an action movie.

But reading about Parkland, I thought back to October, when my classmates and I were locked down inside our school. What happened at Stuyvesant was different from what happened in Parkland, but I think my classmates and I have something in common with teens who’ve lived through mass shootings. We can no longer dismiss random acts of violence as something that happens only to other people. Although I didn’t share this with anyone, in the days after the attack at Stuyvesant, “what ifs” rushed through my head: What if my gym teacher hadn’t stopped me from leaving the building? What if the terrorist had come into our school? What if one of my friends had died?

Experiencing the attack near my school, combined with learning about the Parkland shootings, motivated me to try to prevent shootings like this from happening again. Last spring I joined my Stuyvesant classmates in a school walkout against gun violence, and I also protested at the New York March for Our Lives. Before last Halloween, I would have thought of it more as the March for Their Lives. Growing up in New York, where gun ownership is relatively low, I’d never felt personally at risk. But now I was protesting for the safety of myself, my siblings, my friends, and everyone else.

The attack at Stuyvesant played a significant role in opening my eyes to the problems of violence and hate in the country and the world. A year and a half later, my laptop is plastered with ACLU, anti-NRA, LGBTQ, Return the Children, Black Lives Matter, and #MeToo stickers. I chant my lungs out at protests and my Facebook wall is full of my posts about lax state gun laws like Arizona’s, which allows people over 21 to carry a concealed firearm without a permit.

I’ve broken out of the naive bubble I used to live in, where I thought bad things only happened to other people who lived far away. Now I understand that it’s time for our generation to stand up and fight for an end to school shootings and gun violence. No change is going to happen without us forcing it.

We can no longer dismiss random acts of violence as something that happens only to other people. 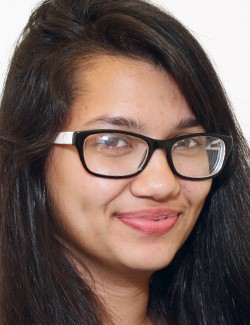