I proved that a brainy girl can also be a jock. In the 6th grade, I was known as the smart girl—the girl who got the highest GPA each semester. I wasn’t content with earning grades lower than 90.

My classmates would joke around that I was a workaholic and that even when I got 100 on a test, I’d still try to solve an extra credit problem. No one really expected the smart girl to be good at sports, and I didn’t either. I was a good runner, but that was it.

In gym class we played volleyball, and I was one of the worst players on my team. I worried the whole time that the ball would hit me in the face. My hand went limp every time the ball came my way, but most of the time I would just duck and move away.

“You should just stick to getting high grades,” one of my classmates said. “Not all people are cut out for playing sports, Smarty Pants. And that includes you.”

I was infuriated, but I didn’t say anything. I just glared at him and rolled my eyes. Deep down, I believed he was right.

But that spring, I found out I was just as good an athlete as I was a student. One of my friends, Liana, had broken her left hand. The next day at school, she was wearing a cast.

Normally, my friends and I would play outside during recess but because Liana now had a cast, we just sat and talked. We settled on a bench at our recess playground, laughing and studying notes.
After a while, I got tired of sitting and talking. I saw that there were a few girls playing soccer with some boys so I decided to give it a try.

I tried to persuade my friends to play with me. “Come on, you guys! Playing soccer might be fun,” I said.

They refused. “But you could still play. We’ll watch you and cheer you on.” My friends smiled warmly.

So I asked one of the guys if I could play.

“You want to play soccer?!” he scoffed. “OK. You can play, but you have to be on the other team. I don’t want my team to lose, you know.” We shook hands and I ran onto the field.

I refused to be the goalie, so they let me play offense. My team’s captain gave me a few tips before the game started. I got into position.

Someone blew a whistle and suddenly all the players were running and shoving their feet, trying to kick the ball toward their goal. When the ball came to me, I made clumsy moves and almost tripped several times. “This is not working out,” I thought.

By the end of the game, I believed I was not only the worst volleyball player but the worst soccer player too.

But something inside me didn’t want to give up. It was only one game, I told myself. I couldn’t be that bad in soccer. I just needed to keep trying.

Over the next few days, I continued to play and my clumsy moves became more graceful, more agile. My friends cheered me on and motivated me to keep trying harder. “Show them a smart girl can be good at sports too!” Liana shouted with her good arm raised up to the sky in a fist.

I started scoring point after point for my team. Both my team members and our opponents were shocked.

After a couple of weeks, when we had to pick team members, the players were fighting over me. “She played for your team yesterday! She should be on our team today,” one person said. Someone from the other team snapped back, “Well, we don’t want to do that. So, too bad!”

By the end of the school year, I wasn’t just seen as the smart girl anymore. My effort paid off. By stepping out of my comfort zone I realized that I, too, could be good at a sport. Now, I’m known as the smart girl who plays soccer. I like being identified that way.

It was only one game, I told myself. I couldn't be that bad in soccer. I just needed to keep trying. 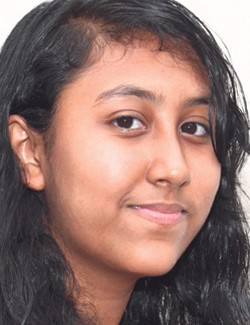